The Colours of Chiang Rai

Two years ago, the world held its breath. When the media spotlight shone on the dramatic rescue of 12 young soccer players and their coach from the Tham Luang Cave, Chiang Mai, Thailand was put on the world map.

Overnight, the entire world became aware of Chiang Rai. Previously, if anyone thought of it at all, it was often confused with the larger Chiang Mai, 180 km to the south, but not anymore. Now Thailand’s most northerly city is firmly on the tourism route.

And so, it should be. Our recent visit showed that Chiang Rai City has an abundance of tourism attractions, headlined by three amazing architectural marvels. These can be summarised as the black, white and blue. The surrounding province contains some of Thailand’s most dramatic mountain scenery so a week in this area is not really enough.

The Baandam Museum (Black House) will astound you. Renowned Thai artist Thawan Duchanee spent more than fifty years building this somewhat controversial museum of folk art. It isn’t just one structure but a collection of around 40 buildings of varying shapes and sizes dotted around a peaceful garden. Each one is different and most are worth visiting. 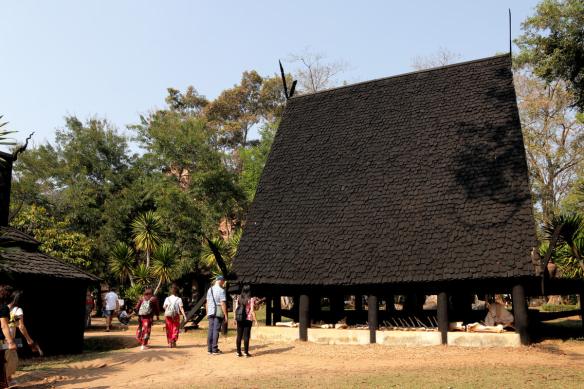 Thawan was an incredibly talented recluse who lived in one of the houses on the site until his death in 2014. Now the whole complex has been taken over by the government. Black, gold and red were the three signature colours of the master painter. These striking contrasts permeate the collection of houses, sculptures, animal skins, bones and relics.

Located about 12 km north of Chiang Rai City, you will need at least 1 hour to look around. This is a very popular spot, so if you want to beat the crowds its best to go either early morning or an hour before the museum closes. Try the mini-pineapples while you are there and you will agree that they are the sweetest in the world.

Wat Rong Khun or the White Temple was designed by national artist and native of Chiang Rai, Chalermchai Kositpipat. The entire complex is an enthralling fusion of religious sanctuary, museum and art gallery. It has evolved into the top attraction for first-time visitors to Chiang Rai and the complex is packed in the mornings with tourists who commute from Chiang Mai for the day.

It’s not really just a temple, despite the monks; it’s more of a wildly expensive and expansive art exhibition. Visitors are surprised to find curiously irreverent imagery on the exterior — as well as Hello Kitty, Michael Jackson and Spiderman on the inside. Some find this imagery kitschy and its sacrilege to others. 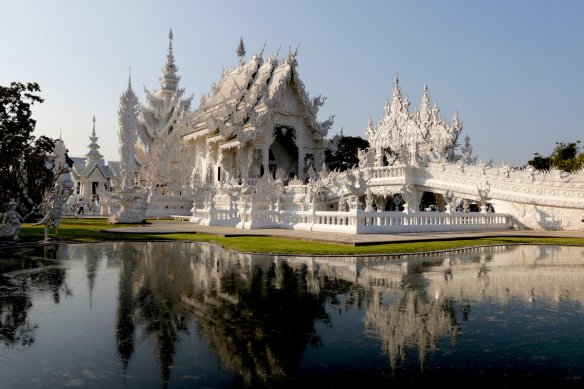 The emergence of the Predator from the ground is interesting and many hands reaching up as you traverse through the lifecycle of life, death and rebirth is a strange experience. But none of this should distract from what is probably the most artistic of Thailand’s temples.

Work on the temple will probably never really be finished, with present projects scheduled through 2070 but this on-going work does not distract a visitor. There is an art gallery, shop and café amongst the other structures in the compound.

The best time to visit is near dawn or dusk to miss the tour groups. The temple is 12 km south of Chiang Rai City. Foreigners are charged Baht 100 (about £3) to enter. 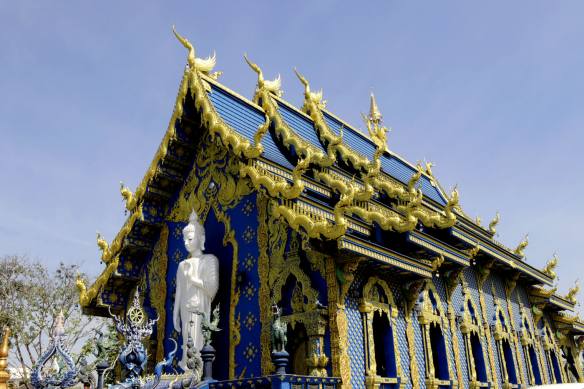 What’s instantly attractive about the Blue Temple is just how vibrant the colours are. The deep blue building decorated with golden detail is simply stunning to look at. Unlike the White Temple, you’re allowed to take photos inside the Blue Temple. You won’t find any pop-culture references inside this one as the interior has a more classic design. At the centre of the room sits a white Buddha lit up with bright blue lights.

The temple has quickly caught the imagination of visitors who flock to its courtyard to take photos and worship. Entrance is free. A popular activity is to buy and eat the blue ice cream available from a vendor on-site.

Wat Huay Pla Kung which is a new entry on Chiang Rai’s growing list of unusual temples combines gold and white. There is a giant white statue of the Bodhisattva Guan (Goddess of Mercy) within which you ride to the top in an elevator, a white temple decorated with Lanna-Chinese art, and a 9-storied gold pagoda. 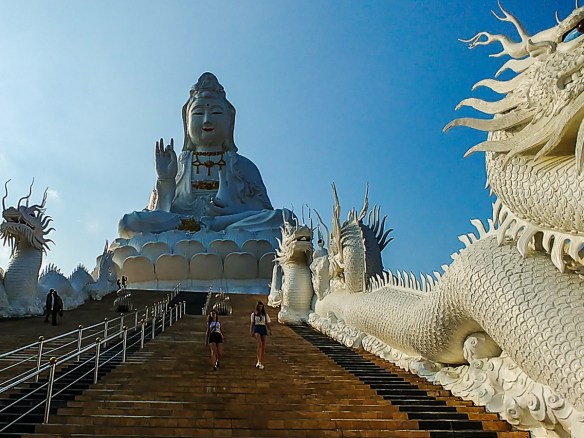 The monk here has supposed healing powers and the mainly Thai Chinese who come to the temple to be healed have donated large amounts of money to build the Chinese statue. It is a giant landmark which dominates the local area.

Getting to Chiang Rai

There are many daily flights from Bangkok on several airlines which take about an hour and 15 minutes. If coming from Chiang Mai, the road trip takes about three and a half hours. The city has a wide variety of accommodation suitable for all tastes and budgets.

Len Rutledge is the author of Experience Thailand 2020 available as an e-book or paperback from amazon.com