An article publish in eglobaltravelmedia.com.au

Ketchikan has rain, totem poles and plenty of interest Phensri and Len arrive in Ketchikan to be greeted with low cloud, rain and a bleak outlook. Although it was June, it looked more like February. But we should not have been surprised. The city has been nicknamed the “Rain Capital of Alaska” as it receives nearly four metres of rain each year over 230 wet days.

Ketchikan is the “first city,” along the popular Inside Passage and serves as the first port of call for many cruise ships visiting Alaska. It is on Revillagigedo Island at the southern tip of the tail that wags the rest of the giant state. You can only reach Ketchikan by air or sea.

Once known as the Salmon Capital of the world, then later as a major timber centre, Ketchikan is now a tourist town. With a population of around 13,000, at times during summer this doubles as up to six cruise boats arrive with thousands of passengers and crew. The demise of the timber industry has led to a radical transformation of the town. Many people who used to earn their livelihoods through timber now have jobs in tourism. For many decades, the huge forests of spruce, hemlock and cedar trees were the source of timber for the logging industry. Logging camps dotted the islands of southeast Alaska, and pulp mills were robust economic drivers of the region.

Then one by one, those pulp mills shut down. Ketchikan’s was the last one still operating in Alaska when it shut down in 1997. Hundreds of good-paying jobs and the businesses that supported them went with it. The shoe shops, workwear stores, and Chevrolet and Ford dealerships went too.

In their place are many jewelry and watch stores, souvenir and gift shops, as well as local tour operations. The newer businesses provide seasonal retail work, but it’s nowhere near as well paid as the old year-round jobs: Now at the end of September, most of the businesses close and many people leave town. During the five-month cruise season, this is not apparent to most visitors. When the gangplank is lowered and the tourists march ashore, they find a gaggle of tour operators waiting to entice them with local offerings: The world’s largest totem poles; an all-you-can-eat Dungeness crab feast; a chance to see killer whales and humpbacks; and the chance to enjoy a brothel tour.

The Ketchikan Visitors Bureau on the waterfront is where we found a map with a self-guided walking tour. Despite the rain, we set out to explore.

Many streets in town are boardwalks or steep wooden staircases so walking is never boring. St John’s Episcopal Church built in 1902, Whale Park and two impressive replica totem poles are initial highlights. We then visit the Tongass Historical Museum to see artefacts from periods going back to a Native Fishing Camp.

Ketchikan Creek flows through the centre of town year-round, its cold water populated in summer by salmon who come up the creek to spawn. Numbers are multiplied by the Deer Mountain Tribal Hatchery which raises and releases 300,000 salmon, steelhead and rainbow trout each year.

Ketchikan has the world’s largest collection of totem poles. Giant carved cedar poles stand in numbers in the Saxman Native Village and the Totem Bright State Historical Park but I recommend a visit to the Totem Heritage Centre which displays very old and rare poles from three Native Nations. Many were carved 150–175 years ago and they tell the stories of families. When a totem pole was raised during a big celebration, everyone would be told why the pole was carved and what it meant. Until 1953, this was lined with up to 30 bordellos. During the Prohibition era, some houses became speakeasies. Now shops, museums, galleries and a restaurant welcome visitors to the unique piled street which is now on the US National Register of Historic Places. 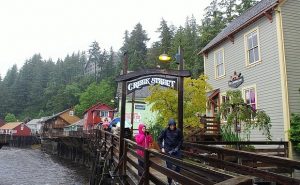 A highlight is Dolly’s House which belonged to Dolly Arthur, Ketchikan’s most famous madam. Her house, preserved much as she left it, has antiques, garish décor and an aura that many want to experience. Tours of the small building are offered.

Here you can explore the natural and cultural history of the Tongass National Forest, by far the largest national forest in the U.S. You can visit a re-created native fishing village and learn how the lush forest sustains southeast Alaska communities today.

For those wanting a walk through the forest, the four-kilometre Rainbow Trail only 15 minutes from town provides a wilderness experience while also having some nice views of Ketchikan

If you want a theatrical taste of the industry that used to fuel Ketchikan, you can go to the Great Alaskan Lumberjack Show, where burly competitors in flannel shirts and braces chop stumps, saw logs, and heave axes at a bullseye. It’s great fun.

Ketchikan is just 90 minutes by air from Seattle, with several daily flights in and out provided by Alaska Airlines. A scheduled daily jet service is also available to and from Anchorage and there are regular services to several other Alaskan towns. Ferries connect Ketchikan with the lower 48 states, and Canada. Many cruise lines operate Alaska cruises from Vancouver and Seattle to Ketchikan