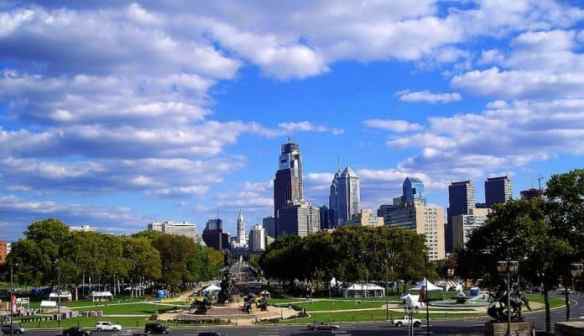 Most people have heard of Philadelphia in the USA yet it doesn’t seem to rank as high as New York, Los Angeles or San Francisco on most visitors’ lists. That is a pity because this thriving metropolis has many attractions and is full of surprises.

Philadelphia is the largest city in Pennsylvania, the second-most populous city in the eastern part of the United States and the fifth-most populous in the whole country. For visitors, it is ideally situated just 90 minutes from New York City and two hours from Washington, D.C., by train. The city attracted 40 million domestic tourists last year and the number is growing.

First-time visitors immediately notice the picturesque streets of the central area which are lined with parks, rivers, shops, public art, restaurants, and museums. Everything seems to be within walking distance from downtown.

You will quickly become aware that history is big here. In 1682, William Penn founded the city to serve as the capital of the Pennsylvania Colony. A century later this is where the Founding Fathers of the United States signed the Declaration of Independence in 1776 and the Constitution in 1787. The city then served as temporary U.S. capital while Washington D.C. was under construction.

Philadelphia is home to many national historic sites which are much loved by U.S. citizens but international visitors who know at least something about American history will also be impressed. Independence National Historic Park, a UNESCO World Heritage Site, is the centre of these historical landmarks and here Independence Hall, and the Liberty Bell are the famous attractions.

Both are free but timed tickets are issued for Independence Hall so you need to plan ahead. A limited number are released each morning at the Independence Visitors Center but they can also be reserved in advance on-line for a small fee. The line of people wanting to see the Liberty Bell can be very long so perhaps the smart thing to do is view it through the pavilion window without going inside.

The number one most visited attraction in Philadelphia is Reading Terminal Market, the city’s famous indoor foodie paradise that is a one-stop shop for everything from local produce and delicious sandwiches to artisanal cheeses and desserts. This was established in 1892 and is now the nation’s oldest continuously operating farmers’ market. 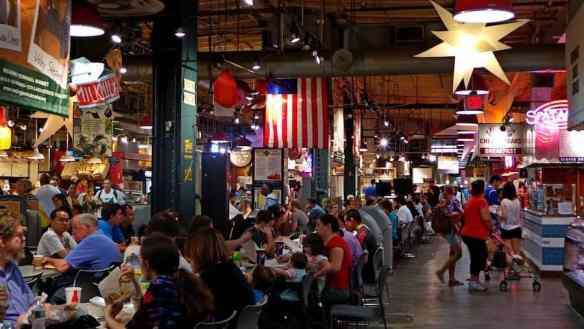 My wife and I walked wide-eyed as we explored the 80 or so merchants that trade here. The Amish have several booths with interesting foods and crafts. Don’t miss it!

Elfreth’s Alley is the oldest inhabited street in the United States. The original homes, which are still inhabited, stand beside a narrow cobblestone street. For a million dollars you can become a local and live on the Alley. On the other hand, a visit is free.

But it’s not only historic locations that attract visitors. The steps at the Philadelphia Museum of Art have become known as the “Rocky Steps” as a result of their appearance in the film Rocky and its five sequels. Tourists often mimic Rocky’s famous stair climb, before posing for a photograph at the statue located at the bottom right of the steps. Most don’t set foot in the museum, thus missing out on one of the best museums in the United States.

Boxing enthusiasts now have a new site to visit. A sculpture of the real hometown champion Joe Frazier was unveiled in 2015 in South Philly.

The area’s many universities and colleges make Philadelphia a top international study destination, as the city has evolved into an educational and economic hub. Philadelphia is the third-largest student centre on the East Coast, with over 120,000 college and university students enrolled within the city and nearly 300,000 in the metropolitan area. This makes for a buzzing cultural life.

Until I went there I had no idea that Philadelphia has more outdoor sculptures and murals (4000 and counting) than any other American city, nor that Fairmont Park is the largest landscaped urban park in the world. If this huge park seems intimidating try one of the city’s original green spaces as laid out by William Penn.

Lagan Circle with its beautiful Swann fountain and nice view of City Hall is a good place to start. Then enjoy a mini-tour of Philadelphia as you putt your way through the city’s iconic sites at Philly Mini Golf in Franklin Square, or close your eyes and take a nostalgic ride on the old carousel.

You can’t visit Philadelphia without trying a cheesesteak which was developed by German and Italian immigrants. These savoury sandwiches of chopped steak and a choice of cheeses and/or fried onions on a hoagie roll are definitely the city’s most famous food.

Philadelphia boasts a number of cheesesteak establishments, however, two locations in South Philadelphia are perhaps the most famous among tourists. Pat’s King of Steaks, and Geno’s Steaks are opposite each other and both open 24/7.

Just about everywhere I have mentioned is walkable from downtown but the Indego bike share program may appeal to some. The Philly Phlash is a quick, easy and inexpensive bus connection to key Philadelphia attractions that has 22 stops on its loop. Buses run every 15 minutes and cost $2 per ride or $5 for an all-day pass. During summer these operate every day but for the rest of the year, there are reduced times.

South Africans need a travel visa to visit the United States. These are obtainable from the U.S. Embassy.

Philadelphia International Airport was the 15th busiest airport in the world measured by traffic movements last year. There are daily direct connections from London on British Airways, American, and Delta.

The original of this article appeared at  http://www.thesouthafrican.com/fabulous-philly-is-full-of-surprises/